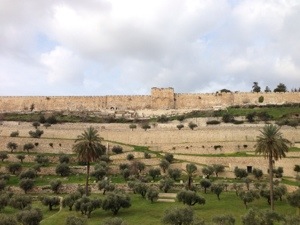 It’s a cold, rainy morning in Jerusalem. The cobblestones are wet, making each step slick and treacherous, as we weave our way through the alleys of the Old City. From Jaffa Gate toward the Western Wall, we pass through the Armenian Quarter into the Jewish Quarter, making our way down to the plaza. Young students, pilgrims, tourists, the religious, and the indifferent all jumble together past the vendors and the beggars, moving through the narrow passageways and descending the stairs, yet keeping their distinct identities. Now the words of the Scriptures are ever clearer, describing all the nations here at the center of the universe. Not simply Arabs, Jews and Gentiles, but “Parthians, Medes and Elamites; residents of Mesopotamia, Judea and Cappadocia, Pontus and Asia, Phrygia and Pamphylia, Egypt and the parts of Libya near Cyrene; visitors from Rome (both Jews and converts to Judaism); Cretans and Arabs.” (Acts 2:5-11a) The city is awe-inspiring, the archeology breath-taking, the complexity unfathomable. And the God of the people who built it far more so. “Who shall I say sent me?” asked Moses, and the answer was “I AM.” (Exodus 3:13-14.) More than fourteen hundred years later, Jesus answered the leaders of Jerusalem by ascribing this same name to Himself: “Before Abraham was, I AM.” (John 8:58) Only a handful of moons passed between this proclamation, and Jesus dragging a cross down the Via Dolorosa, having been unjustly condemned, scourged and sentenced to death. These cobblestones, now two thousand years further into the future, are worn beneath our feet, and we preach that same message of salvation proclaimed by Peter, through the inspiration of the Holy Spirit.

“Therefore let all Israel be assured of this: God has made this Yeshua, whom you crucified, both Lord and Messiah.” When the people heard this, they were cut to the heart and said to Peter and the other apostles, “Brothers, what shall we do?” Peter replied, “Repent and be baptized, every one of you, in the name of Yeshua the Messiah for the forgiveness of your sins. And you will receive the gift of the Holy Spirit. The promise is for you and your children and for all who are far off-for all whom the Lord our God will call.” (Acts 2:36-39)

O Father, that my people would indeed be cut to the heart, that the veils would fall from their eyes, and that they would truly repent and receive the Lord and forgiveness for their sins.